I spoke with Renata Cervetto, one of the four curators of the 11th iteration of the Berlin Biennial about the initial outlines of the biennial and the adjustments that were needed following the pandemic. The 11th edition of the Berlin Biennale is slowly coming to an end with its epilogue exhibition The Crack Begins Within. We ask Renata Cervetto, one of its curators, about the biennale’s intentions: ‘Covid-19 enabled us to work on a lower, more human and local scale, something that we had been aiming for already before the pandemic.’

Madelon van Schie: The 11th Berlin biennial opened to the public over a year ago, as ‘a series of lived experiences’. What were the initial outlines set back then?
Renata Cervetto: ‘When our proposal won, I think it was quite evident that we would include different forms of knowledge, study, pedagogy, struggles and resistance that we brought from South America. Added to this were the decolonial theories that are implicit in our work regarding both museums and knowledge, bodies, genders and sexualities. This led us to include the work of Elena Tejada-Herrera for instance, which explores alternative narratives of femininity. In her video installation you see different groups of women, girls, trans women and elderly women performing female power in diverse ways, defying patriarchal structures. But also ecological issues were on our mind. In Experience n1, our first presentation, many works that we showed were dealing with themes such as the deforestation of the Amazon and how this started to affect other political and social processes. Another very topical issue, of that time up until today, that found resonance in our discussions and programs was the debate of how European museums should deal with their colonial collections. And the importance of museum collections for our collective memory. Centrally in the biennial is an enlarged photo of the meteorite taken by Léo Corrêa. The meteorite was one of the few surviving objects after a devastating fire that took place in the underfunded and neglected National Museum in Rio de Janeiro two years ago, when 20 million of (scientific, natural history and ethnographic) objects were destroyed. Apart from these thematic directions, half of the bb11 participants is from Latin America and many others from what we call the Global South.’ 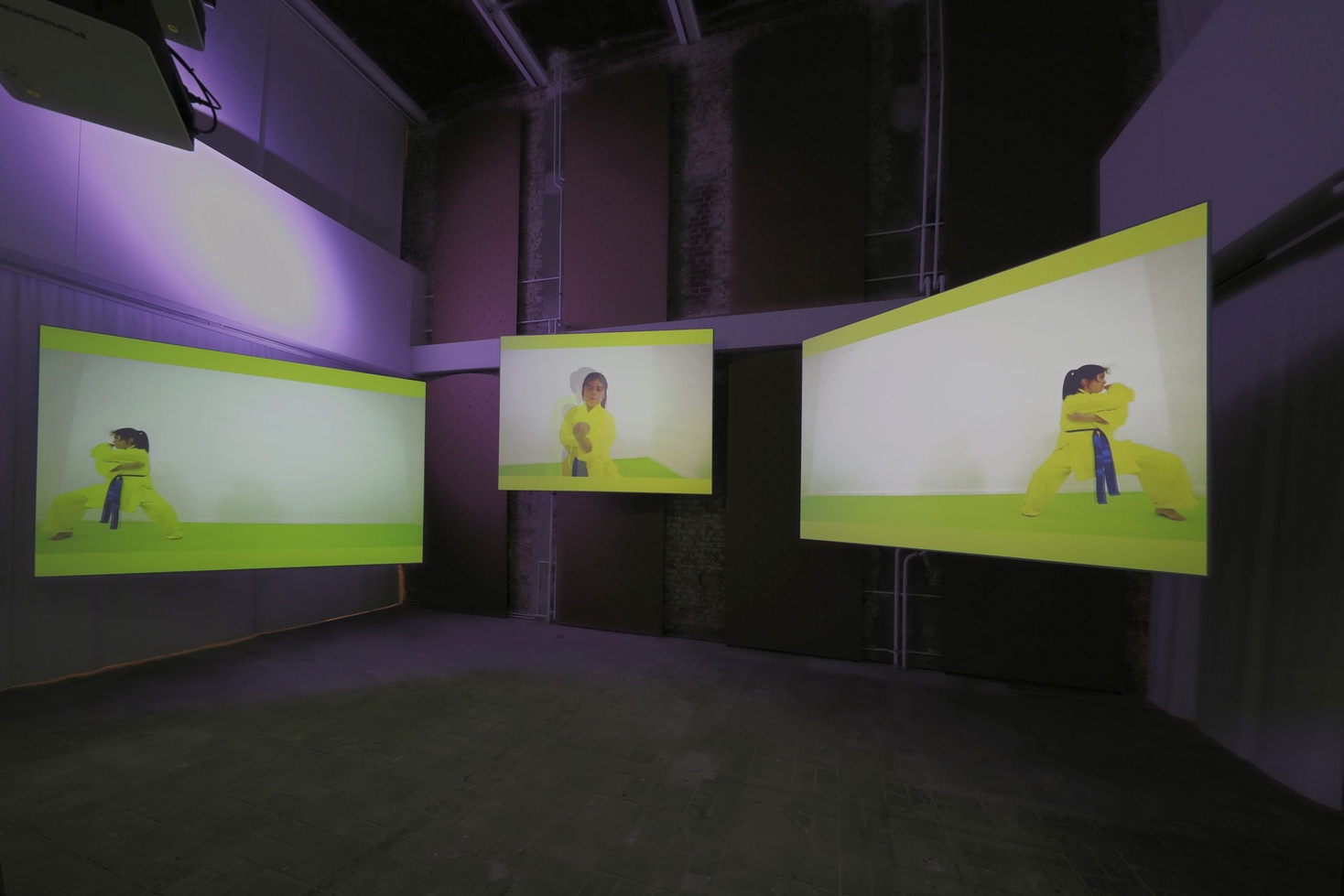 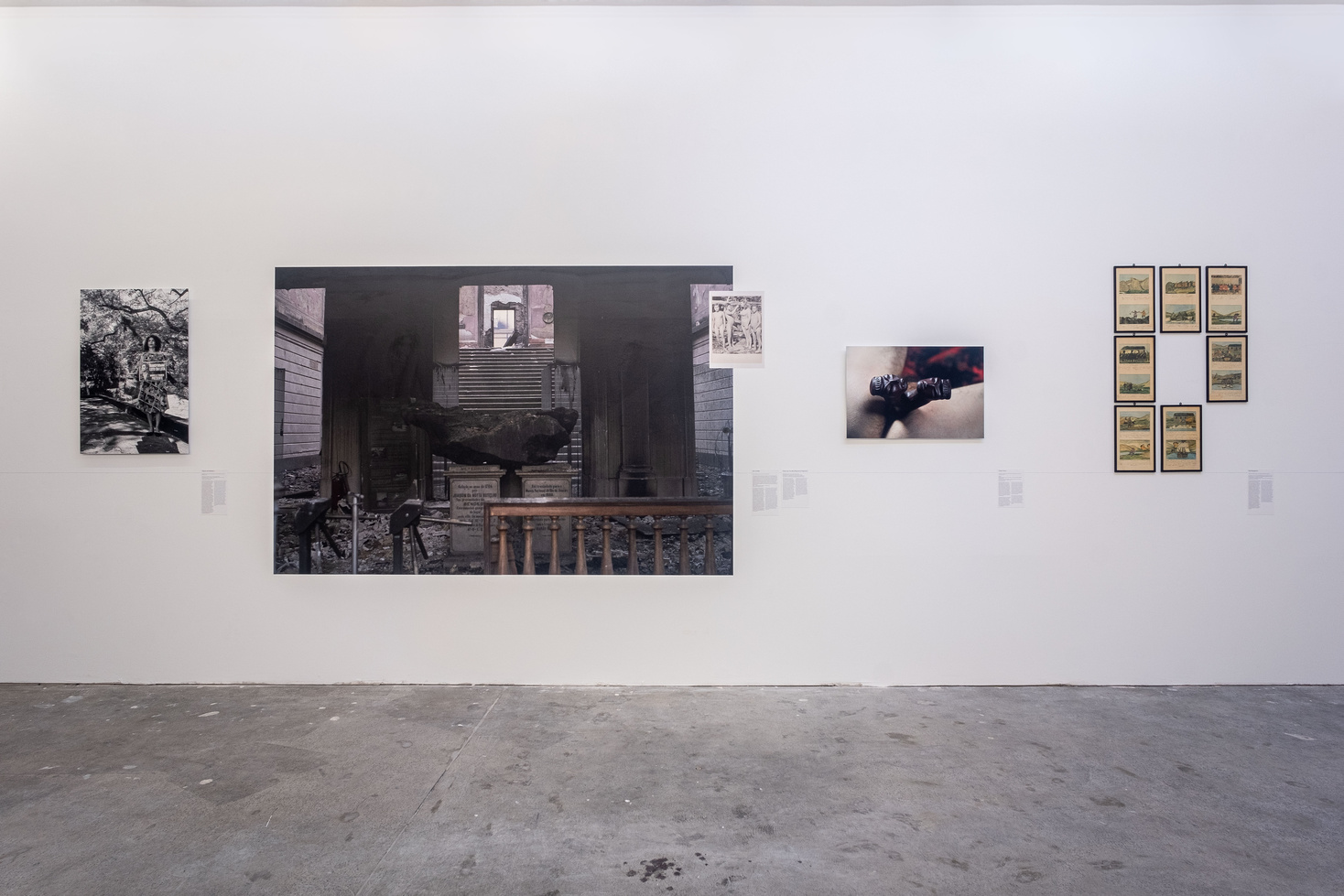 Madelon van Schie: Besides its extra canonical focus, bb11 was programmed as a ‘project in progress’ rather than as a fixed curatorial framework, for which you collaborated largely with local institutions and individuals. How did that work practically?
Renata Cervetto: ‘Although we had our curatorial proposal written when we started working on the project in October 2018, the process itself indeed played a key role. Experience n1was based on our research and the questions we had brought to the city, where we all lived by then, but we were also interested in sharing the space with local projects, archives and individuals such as The Feminist Health Group, De Remise and Sinthujan Varatharajah. We shaped the program at the same time we inhabited the space and the city. This way of working was a challenge for the institution, because this has its own rhythm of production and deadlines. But we really wanted to do things differently. We were all strongly committed to build something more than an exhibition. Personally speaking, it was the first time that I worked on curatorial concepts and discursive platforms at the same time. We developed formats of engagement with the audience, worked on a series of publications, of which the last one is currently in the making, and we were determined to have a constant presence in the space. For us, being present in the space the whole day, speaking with everyone who came in, was a very important way of engagement. Since the very beginning we moved our offices to Ex Rotaprint, to see how people appropriated this exhibition space and the projects, and to be able to speak with them one to one. This stage was super important to understand the uses of the space that our visitors also needed. We had invited Mirja Reuter and Florian Gass for instance, who developed a project in dialogue with neighboring children. Together they constructed stick puppets and stage sets for shadow theater performances that reflected on the performative nature of individual and social group identitiesamong others. Many children that stayed for hours playing in and with the exhibition. For the experiences that came next, we acknowledged this, and we created a special place for them. The great thing is furthermore that schools we invited from the start kept coming back. And now there is a continuity; the relation with the schools will go beyond this iteration.As a general outline, I think our intention was always to have an ongoing dialogue with the city and be able to build long term relations with our visitors and the community.’

Madelon van Schie: And then, in the middle of the preparations Covid-19 hits Europe…
Renata Cervetto: ‘The pandemic, when it arrived here in March, caught us just when we had a very strong work rhythm. We were not only producing the former exhibition, Experience n3, but also the works for the current stage and its public program. Everything was in the move. All this collapsed because of Covid-19. We went through three months of total pause and of uncertainty about what was going to happen, knowing that everything was already in the way of being produced. But in a way it was good when we stopped, because it gave us time to look at what we had. More than before it enabled us to work on a lower, more human scale, something that we had been aiming for already before the pandemic. We had more time to study and deepen the projects of each artist, write, study together through zooms where we presented each project to the entire team. We found alternative ways of being together. And naturally, the focus on and our relationship with local audiences intensified even more.’ 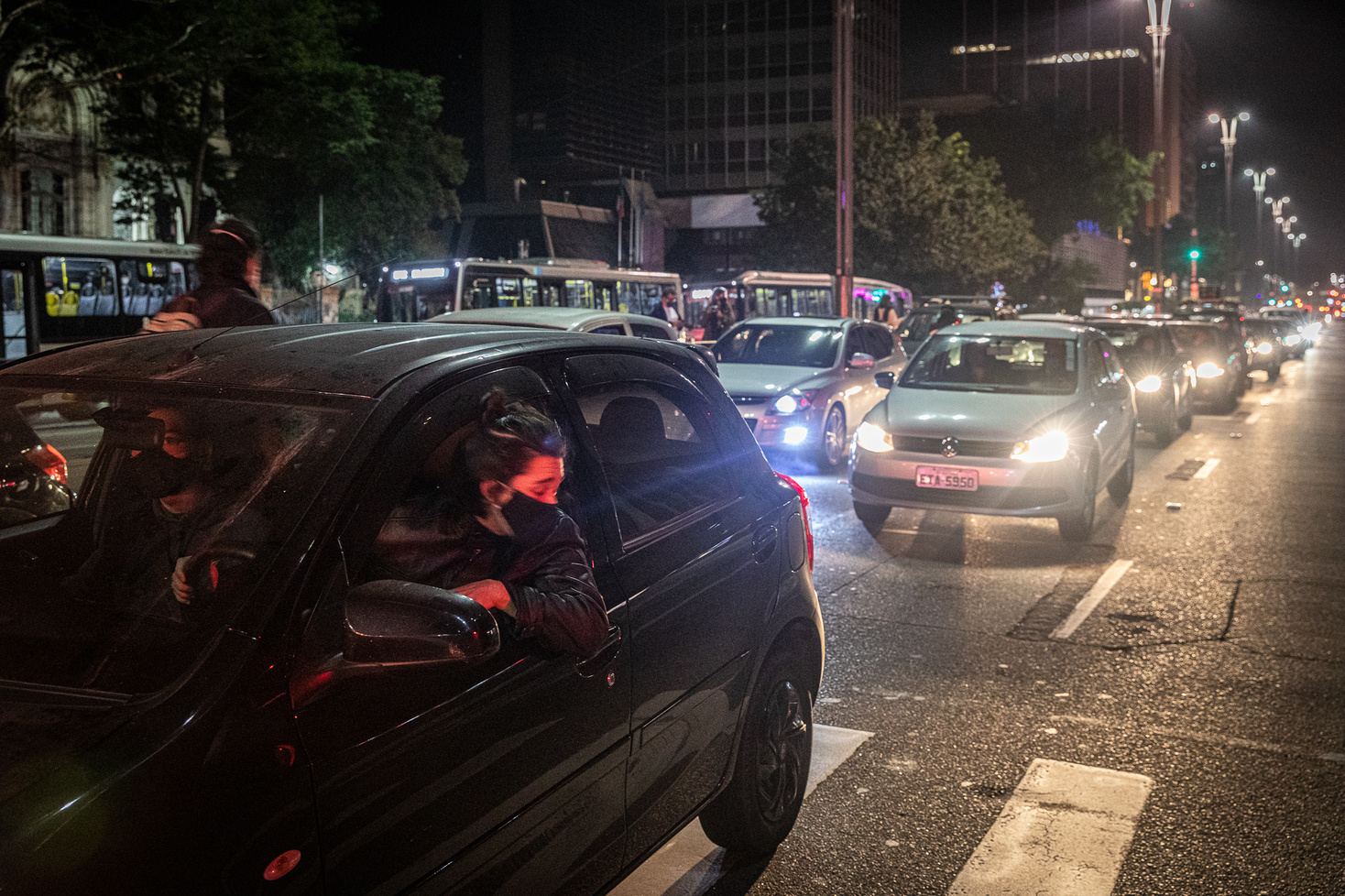 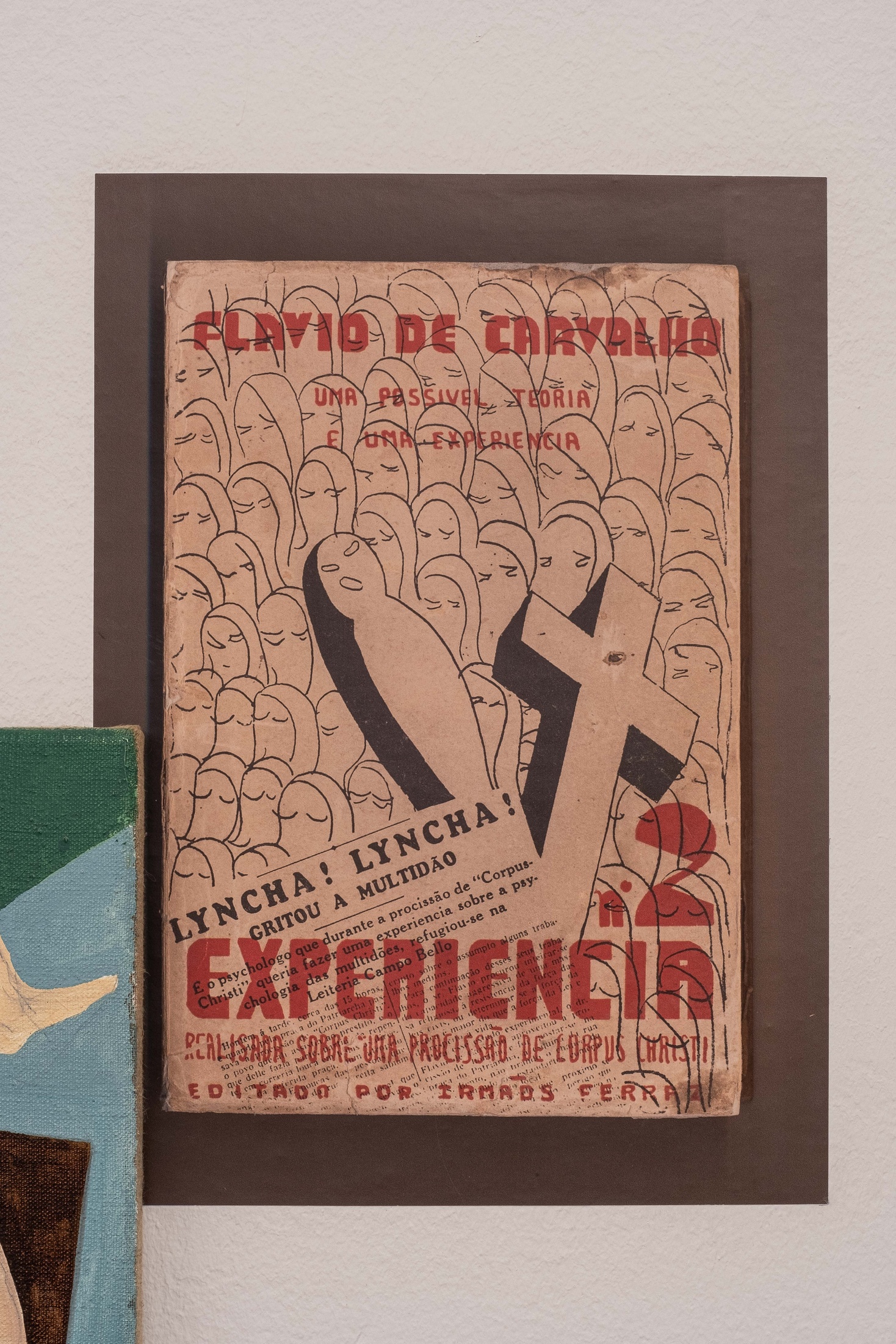 Madelon van Schie: How did this unprecedented event influence your program?
Renata Cervetto: ‘Despite the extreme situation, we always maintained that we were not going to let go any of our artists and the commitment we had towards them and their work. This was a challenge because we had planned many performances while the artists couldn’t come. Teatro da Vertigem for example, a collective from Brazil was going to do a performance at theLeopoldplatz here in Berlin which turned out to be impossible. So, in the end they did an intervention on the Avenida Paulista in Sao Paulo, which is located in the financial district. Of course, it was a struggle to perform it there too, especially in this Bolsonaro era, to which the action was a direct response. The result however was very powerful. During night time more than hundred cars drove slowly in reverse, as if it were a funeral march, where at some point they passed a reproduction by a work of Flávio de Carvalho (1899–1973), which was the depiction of his mother in her deathbed, an image that obviously evoked the thought of the deaths of thousands these times. The intervention itself was also inspired by the work of De Carvalho, specifically on an ‘experience’ he organized in 1931, for which he walked in the opposite direction through a religious procession in Sao Paulo, to the fury of many. The recordings of this intervention by Teatro da Vertigem is now on display in the KW Institute for Contemporary Art in Berlin, and so are different works by De Carvalho. But of course, many plans and proposals we had to leave aside. No one knows that because it looks good, but it is not what we had in mind. At the same time, it is a miracle that we can even have a biennial in these times.’

Madelon van Schie: And what about the visitors, who largely stayed away?
Renata Cervetto: ‘Yes, for the public programs this is a very interesting question too. Already since we started in September 2019, people came to our space at Ex Rotaprint not only to see the exhibitions, but also to chat or just leave their children playing. Due to the pandemic we had to modify the entire program that we had planned in January for the final part. We began to consider the public space as a safe space to be able to put together small dynamics. Even more so than we had already envisioned. In the end, only 22 of the 70 invited artists could come. Therefore, we have been, and still are, organizing sessions in which we mix online contributions and interviews of artists who could not travel with the one who are here in Berlin. This is where we are now, a bit more over a month after opening. Many things happen on the edges of the institutional, in the street, squares and terraces, and that is super interesting, because it invites people who may not be interested in seeing the biennial itself but are interested in being together or accompanied for a moment. For this reason, we set up Thursday Tandem too, which facilitates a spontaneous dialogue between individual visitors. In general, I would say that the relation with the local people has become much stronger, even more so than we had envisioned and strived for before Covid-19.’ 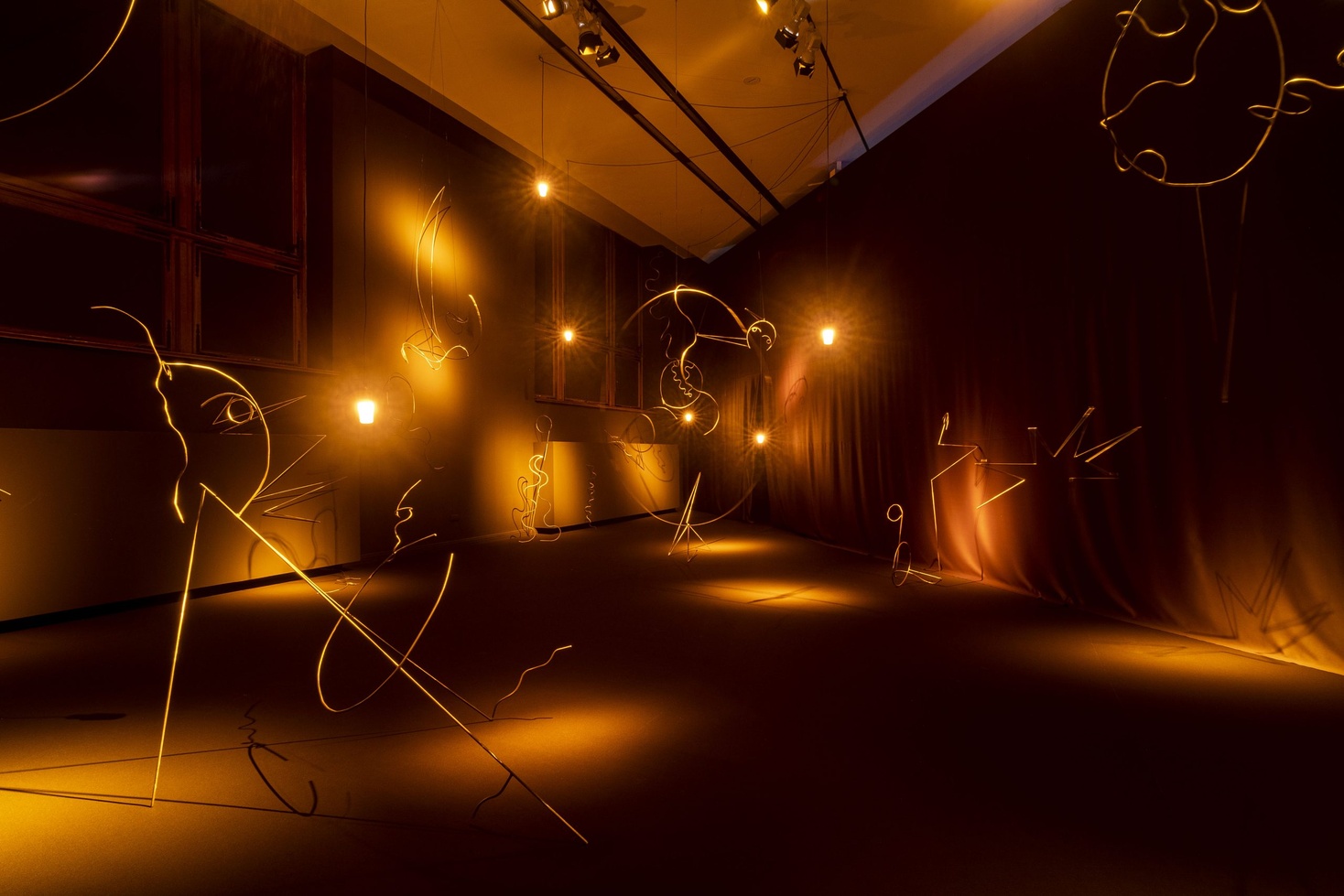 Madelon van Schie: Would you say that this crisis trickled down in some of the art works on show? That they, intentionally or not, shed light on these intense times we are facing?
Renata Cervetto: ‘Yes, I think that the work of Mariela Scafati has gained an unforeseen significance. We initially had invited her for the way she addresses the masses and her strong statements in relations to queerness in Argentina and Brazil. We were drawn to her installations that consist of canvasses assembled as bodies. In the way they are shown now, they seem to almost want to get up, as if they are in a state right before going to march, but they are still waiting, paused in a way. This posture is what she wanted to emphasize. It represents a state that is familiar to so many of us now. And the installation of Andrés Pereira Paz is interesting to name here too. It consists of a dark space with hanging, slow burning spheres and celestial bodies and furthermore includes a sound of a bird that lives in the Amazon, the Guajojó bird. Because of the fires caused by deforestation this bird had to flew and it was found in the Andes, where the altitude affected him. So, you hear the sound of the bird together with his increased heartbeat. In Bolivia these birds are regarded as an omen of bad luck, so in a bitter way this work does justice to these intense politically, socially and environmentally times. Andrés wanted to address the falling down of a system, of a way we relate to each other. And therefore, what you experience in his installation is the fall of the sun, the moon and the stars. Finally, I think that the picture of the meteorite, its ruthless, powerful presence in that ruined museum space where it appears as a lonely survivor at the same time, has also become unexpectedly emblematic in the current context.’

Why Use a Research Paper Service?

Why You Should Think about An Essay For Sale

How do I select a paper writer to write my essay for me?